What do you do in situations like these? Exactly, you either talk or write to yourself.

Yesterday evening I decided to quickly beat one of my games before my copy of Tales of Symphonia arrives. I was conflicted between Trinity Universe (right now I’m at chapter 7 of Riz’ story) or starting one of my HaruToki games which arrived last week. Whoever follows me on Twitter already knows my decision: Harukanaru Toki no naka de: Maihitoyo.

Be aware of spoilers.

First of all I watched the Maihitoyo movie a few years ago. To sum it up I didn’t like it very much. I can’t explain why but I was extremely annoyed by Akane. This confused and frustrated me very much because I really liked her before (and still do). My experience of the movie was the main reason why I was uncertain to play this game. However, I didn’t want to skip it and go with HaruToki2 instead. Haha, it’s easily the same problem I have with Angelique Etoile. I still blame the low-budget animation for my reluctance of the game – and I haven’t even played it so far!

Anyway back to Maihitoyo. It’s been an awful long time – I didn’t realized how much I missed the HaruToki cast! The first chapter together with important scenes is voiced (no full voice ;w; WHY). Right at the beginning I already had my helping of too many feelings. 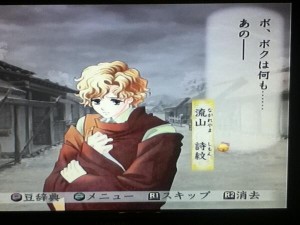 Shimon. He isn’t exactly my favourite character but I don’t hate him. I honestly felt sorry for him because the folks still accused him of being an Oni (they even threw stones at him while Akane was beside them, wtf). Fortunately Inori stood up for Shimon: 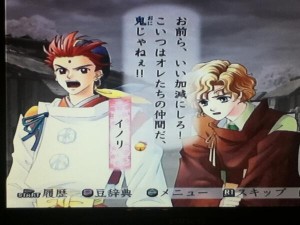 This scene also made me question the timeline of Maihitoyo. It can’t be taken place right at the beginning of HaruToki because Shimon is getting along with Inori. Later (I guess around chapter 3) we see Ran who wasn’t rescued so far. I hardly believe Akane and the others even have met Ran. So Maihitoyo is somewhere in the second quarter of the first half? Although this doesn’t make sense because TENMA IS COOL AS SHIT. He didn’t give a fuck about anyone who was near Akane (he was kind of her watchdog right at the beginning) and didn’t react to Tomomasa’s provocations at all. THIS ISN’T THE TENMA I’M USED TO OK.

Speaking of Tomomasa – my favourite out of all Hachiyou – …. YES, I went with his route. I’m a sucker for older guys tho’ I still can’t believe he’s 31. I will never get this in my head (especially because Takamichi is only 19 years old. He doesn’t look that young right beside Tomomasa or visa-verse).

And what can I say? I loved it ( /)u(\ ) It began with Tomomasa teaching Akane to play an instrument right to various teasing attacks and whatnot. He basically gave her the feeling she still was just a kid (which more or less is true because Akane is 16 years old). Over the course of time Tomomasa began to question his feelings because they started to change. It was a nice change of pace to be able to read his thoughts as well, which is definitely one of the game’s features.

Tomomasa’s changed feelings resulted in a more-or-less confession one morning. He didn’t exactly tell Akane he loved her, but he let her know that he deeply cares for her and she isn’t just a kid anymore. Oh the good times. Enjoy it, because something is going happen, namely the grand finale. If understood correctly, Akuram (“boss of the Oni” if you want) lured Akane in with an illusion of the Hachiyo fighting against him and an injured Tomomasa (that bastard). As soon as the real Hachiyou entered the scene, Akane was already captured by Akuram and used as a hostage. The Hachiyou couldn’t really do anything at that point or they would risk Akane’s life. Right at this point Akuram called out for one of the Hachiyou – Chi no Byakko – aka Tomomasa. I tell you my blood ran cold at this moment. One could hear in his voice that Akuram was scheming something horrible. Tomomasa obeyed and entered Akuram’s “stage” not before telling his comrades to sit tight, he’ll handle it somehow. The next thing happening was… anything but pleasant. Akuram attacked Tomomasa various times right in front of Akane’s eyes. Tomomasa couldn’t (or rather didn’t want to) fight back because Akane was still in the arms of that Oni bastard. He had to endure it, he simply had to… ;__; I was crying in front of the TV, sobbing like some child who’s favourite Teddy Bear was stolen. How could you do this to my heart?” I didn’t need to think twice and choose the option where Akane yelled at Akuram to stop it (and she’ll do as he says, if remembered correctly). Tomomasa, already on the floor, told her to not give in his demands for which Tomomasa earned another bunch of attacks. Too much for Akane to handle, she finally is able to release her power and get free of Akuram. 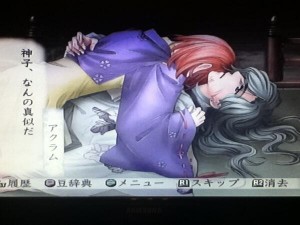 Did I already mention I was FREAKING CRYING THROUGHOUT THE WHOLE SCENE?

What Tomomasa said next made the tears rolling down my face even faster.
She should let him go. She should run away (and thus leave him behind).
HE JUST WANTED FOR AKANE TO BE SAFE I’M DYING OKAY.

And then the most anti-climatic thing ever possible happened. Tenma. That guy jumped out of nowhere and punched/ripped Akuram’s mask out of his face, focusing Akuram’s attention on the rest of the Hachiyou. Akane was freed so none of them had to hold back anymore. After one last battle (hit me, I don’t remember the demon-thingy’s name) Akuram was defeated and they lived happily ever after (∩_∩) 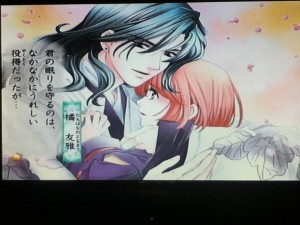 The credit rolls and Tomomasa’s Ending follows. The usual stuff, confessing his feelings and saying how much he really loves her. I’ve basically beaten Maihitoyo (Tomomasa’s route) within 24 hours – including almost endless reload of scenes to try different answers. What surprised me most of all was this: 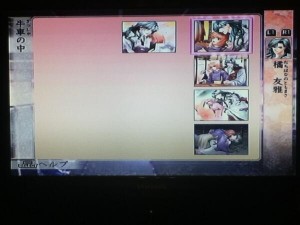 I managed to get all CGs. SWEET MARTEL HOW DID I DO THIS. This was a first because I was still missing like 3 CGs in the main game. Truth to be told, the affection system of Maihitoyo is a lot easier than the one of the main HaruToki game. Also, the game itself is shorter than the main one. I’ve beaten HaruToki on emulator with quicksave/quickload and speed up in the same time as Maihitoyo on the PS2 with lots of reloading.

Altogether Maihitoyo offers 10 different endings. Eight of them are reserved for each Hachiyou, the 9th one would be the extra character (Suefumi) and the last one… a general ending perhaps? Very likely in my opinion if we consider the endings of other NeoRomance games.

Hello and welcome to CruxisLyrica's blog! The place on the internet where I occasionally dump my fanwork.

Feel free to look around ❤